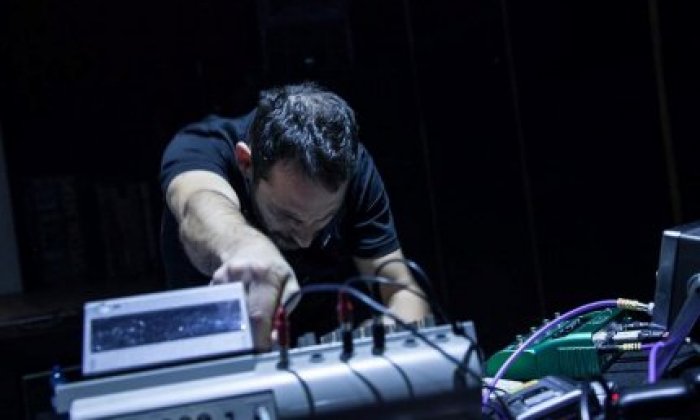 Meeting a looter of the ancient world is something that helps understanding this modern one. These looters’ behaviour does not contain violence or abuse, they are idealists armed with high sensitivity microphones, the same sensitivity they spread on the grooves where the sound is sown. Enrico Coniglio is one of these warriors, inoffensive yet dangerously able to alienate and perturb those who come in contact with the work they produce. One of the greatest Italian exponents of soundscaping, master of sound alternation that allows listening experiences soaked with opposed materiality, linked to the apparent inconsistency of the recorded sound as well as to the ethereal sweetness of the just faint melody. This is a chat that we had a few months ago, on the occasion of his live performance within the festival Oblique Strategies curated by Giuliana Placanica at the Fusion Art Center / Neo of Padua, an event dedicated to border-line sound - which will resume in the fall.

AREAVIRUS-Topofonie Vol. 1 year 2007, Open to the Sea - together with Matteo Uggeri - year 2018. What happened in this long period of time, which have been the changes, even the mental ones, and what have you left behind.

There have been lucky moments, alternated with moments of uncertainty. When I started, at the beginning of 2000, everything seemed easier, there was a lot of enthusiasm and attention. Above all, there wasn’t all this buzz on social media and as musicians we worked in a perhaps less shrewd but more sincere way. I don’t like how the world has changed in these eleven years. Today I have less hope in the future in general, but also less expectations, less performance anxiety. I have realised that at some point we must give up a little. To renounce does not necessarily mean to fail, at some point things happen, yet it takes a lot of patience.

Enrico Coniglio has two souls: the intimist and introspective, linked to the musical thought that reflects the silent elegance of electroacoustic classicism, and a cooler and lucid soul that dwells in his across-the-border sounds. How can you combine the two things.

Fact is that I probably can not conjugate them at all. Both exist and find synthesis in the inconsistency that distinguishes me. If I look back I see a path heavily marked by digressions, some more serious, others in the area of pure amusement. In any case, over the years I have played with giving different names to these different inclinations. Some projects, especially collaborative projects, have worked well (Lemures, My Home, Sinking, Herion ...).

What’s the mission of a researcher who deals with soundscaping.

The object of my research is to understand how the territory and its soundscape transform, what happens to the local identities and their hypothetical "soundmarks" and whether it is useful or not to preserve them. I realised that some answers can be found by addressing the issue through my personal investigation of the marginal areas, those areas of transition and therefore of contamination between the tiles that ideally compose the landscapes of our inhabited areas. It is a research topic that I am pursuing in an underground, almost elusive way, and that I have been able to explore above all thanks to some beautiful artistic residency. For me, the sound remains a very powerful mean to re-invent reality and my aesthetic is mainly that of exploring its immanent possibilities.

"Soundscape" is a recurrent word that is occupying more and more space in the articles or discussions related to the research around sound. What lies behind this.

The idea of soundscape as "environment of sounds", by Raymond Murray Schafer, to tell the truth, has always seemed reductive to me. Personally, over the years I have embraced this definition: the soundscape is a topophonic aspect of the landscape, where the landscape is a "complex system of ecosystems", the result of the transformation processes resulting from the interaction between anthropic and natural actions. In my opinion, this approach, with its ecologic imprint, postulates a very simple concept: the soundscape is a dynamic system and one made of contamination. Naive is the idea of making it a temple for the nostalgia of a past that is destined not to return.

We were talking about the two souls that lie in your compositions. Thinking well about it, however, I believe that the one prevailing is that of the writer who tells an exciting story and does so with the noise of the world around him. All it takes is listening to that part of your work created exclusively through field recording.

You are right, in my composition the narrative aspect prevails; it is something innate that is inside me. It must be said that sound exists by itself around us, capturing it and operating on it is a poetic action that builds meaning. Registering and uploading hundreds of field recordings to web archives, be they travel logs or sound maps, seems to me to be an entirely meaningless, naive and redundant operation ... which is why I no longer recognize myself in the philosophy which sees in the simple act of recording a creative action in itself. With sound we have to build something, otherwise it risks to remain inert material, which generates nothing.

A question that I often ask to the sound artist who deals with the aesthetics of the soundscape concerns his belonging or not to a world that, seen from the outside, seems to be little tied to a widespread reality even if, as absurd as it may sound, it essentially deals exactly with it. It seems to exists something like a transparent barrier that filters passion, making the approach to this discipline very 'cathedratic'. What's your thought about it?

The problem is, more broadly, of that electronic music that someone has baptized as 'high culture' - that barrier has always been in place, because that sound is not accessible to most people, and because its proponents have always wanted to maintain an aura of mysticism, barricading themselves behind an impenetrable shield under which to hide some kind of alchemical secrets. I am of the opinion that electronic music should be taken less seriously and, if possible, un-veiled. Esotericism has led to nothing, if not to alienating the public.

The collaboration with Leandro Pisano - among the many things, founder and artistic director of Interferenze festival - led to the creation of Netlabel Galaverna. What are the purposes of this digital label and what does Enrico Coniglio think of the freely distributed sound – does it continue to keep intact its primary thrust or has something changed?

Leandro and I created Galaverna when the scene of netlabelism was already very populated and the labels that were printing records were in full crisis, because sales had started decreasing more and more, let's face it. The label was born as a sister company of Laverna, as a platform on which to distribute the works of sound artists personally involved in the research around the contemporary soundscape. To answer your question, the statistics of our site say it all - today we see a lot of streamings and a few downloads. Perhaps the new netlabels are ‘cassette-type labels’ – with reduced production costs, prices that are consequently accessible, on a definitely imperfect support but which remains very hot nevertheless. It is not only retro-mania, the cassette is the prodrome of the piracy, when it was dubbed, it was duplicated, it was also recorded from the radio or from the TV ... Many netlabels have closed their doors, with Galaverna we resist even if it’s a bit slow. We have a nice catalog and the positive feedback still gets in.

A question that is particularly close to my heart concerns the relationship between your sound and the city that has always hosted it, Venice.

Venice is a city devoured by the mono-culture tourism, which is suffering the effects recorded in all other Italian historical city-centers, neither more nor less. The city is collapsing, it’s a process triggered a long time ago, unavoidable and hence catastrophic. I'm sorry, I've already said that I'm a pessimist, so I do not see any possibility of salvation. I try to depict Venice in a non-nostalgic way, so not to give up on a clear vision of the tragicity of the present. Then I don’t know if I succeed in this, because romance, as a personal sensitivity to re-invent the world, is fixed in my DNA. There was a graffiti on a wall that said: "Venice is sinking" ... hopefully, it’s going to be soon.

"The great parade of hostile winds" is the title of your latest live work, presented so far in Moscow and in Padua, at the "Oblique Strategies" festival. Tell Us About It.

This work is the starting point for a new way of presenting myself live, based on a few sound devices with which I can interact in a more concentrated and immediate way. The live develops starting from the generation of very high frequencies, similar to tinnitus, barely intelligible by the human ear and characterized by a sharp sound, which is progressively reinforced by the beats produced by the frequency modulation resulting from layering the pulses through a loop machine. As the log goes down, the set becomes more complex and creates a texture of drones with an environmental imprint. The purpose is to explore the interstitial sound of the matter, produced by the friction of acoustic frequencies whose overlap reveals hidden sounds. The title was suggested by Diego Chersicola.

Two words on the Russian gig cannot be left out.

The audience at the DOM Cultural Center in Moscow, where I played with Giulio Aldinucci thanks to the VIVA ITALIA project by the brilliant Dmitry Vasilyev, was very affectionate; as it was at the NEO in Padua - which does not happen often, especially here in Italy. Many handshakes, chats and a few records sold. It’s been a pleasure. I think the Russian audience likes dark(ish) sounds, they are northern people in fact. It’s been an incredible experience overall, walking around the forest still covered in snow, while Dmitry was drilling the beech trunks with the battery-operated drill to collect their juice through a drip infusion. Color note: Giulio almost stepped on a viper that had just came out of its winter hibernation… we’ve been lucky.

Let's go back to your compositions, such as the inputs that create them.

Listening to music made by others - I'm thinking about those records you'd like to have done yourself. I can not stand those who say they do not have time to listen to the music of others. The ideas then come from everywhere. I think it's especially important to think long before turning on the computer, press play on the recorder or put your hands on an instrument keyboard.

What do the stars read in your future?

Under the gaze of indifferent and distant stars: several projects with Nicola Di Croce, with whom we recently signed the sound design of the Venice Pavilion for the 2018 Biennale; a new record in the mixing phase with the tireless Matteo Uggeri and the idea of a return of Lemures, I throw it there so Giovanni cannot pull back ...