Born in 1963, Maurizio was an amateur musician throughout his childhood and adolescence; he played guitar, drums, flute and, yes, plenty of the odd clay bongoes, while carrying his studies in architecture and interior design in his hometown Trieste, Italy.

He turned full attention to music at 21, when he began studying conga drums. By 1986 he had abandoned any other form of livelihood, and officially started his full-time career as a musician, playing for theatre, and local jazz, salsa and rock bands.
Between 1989 and 1991 he went through an intensive period of study of Congas and Afro Cuban Percussion, frequently visiting La Havana, Cuba, and learning from Tomàs “El Panga” Ramos, Changuito, Los Chinos and many others.

He moved to London in 1991, and quickly established himself as a session musician.
Quite an active presence in the British Funk scene throughout the nineties, he was the percussionist of Jamiroquai during their “Emergency” and “Space Cowboy” period, and of the James Taylor Quartet from 1994 to 1998; plus a number of less notorious acts with some of the most important artists involved in that scene, such as Mike Smith's The Whole Thing and Dennis Rollins.
During the same decade, in different stages, he was involved in most of the Salsa and Cuban related project to originate from London. His collaborations in that field include, amongst others, Jesus Alemani, Snowboy, Alex Wilson, Tumbaito, Herman Oliveira.
He has also worked with Paul McCartney, Paul Young, Greg Osby, Kaidi Tatham, Dego McFarland, Finn Peters, John Edwards, Steve Beresford, Shabaka Huchkins, Andrea Parkins, and the choreographers Lea Anderson, Bill T.Jones, Maja Garcìa and Jane Turner.

With drummer Davide Giovannini he co-founded the duo Afroshock, whose activity spanned from 1989 to 2000. Afroshock released only one album, in 1998: “ Accommodating Gods”, a creative tribute to the music of Cuban Santeria, still talked about by the few hundreds who bought it as one of the most important works for percussion music to come out of the UK in the nineties.

In 2000 Maurizio joined Ezzthetic, a community of visual artists, actors, djs, musicians and artists from other disciplines based in Italy, with whom he collaborated on a number of productions in the fields of theatre, cinema, installation and visual art.
In October 2005 Ezzthetic released their only commercially available CD, called simply “ezzthetic_ep”, out in UK with the F-IRE Label. After the release of the EP, with an abrupt braking, Ezzthetic ceased its activities as a collective.

After this experience, back as a full-time Londoner and eager to pursue the paths of research and experimentation opened during the Ezzthetic years, Maurizio started a collaboration with the tuba player Oren Marshall, and began developing a personal language in improvised music.
During the same period he started working with the electronic musician Sam Britton (aka Isambard Khroustaliov), from the laptop duo Icarus. Isambard and Maurizio's first album “Five Loose Plans” was released in 2006 with the label Not Applicable. Together with other discographic collaborations of Sam and Ollie bown, the other half of Icarus, Five Loose Plans contributed in enlarging the catalogue and broadening the scopes of the label, originally intended solely as an independent outlet for the Icarus recordings.
Not Applicable eventually consolidated into a team of like minded video and music artists, which toured UK and Europe in 2006 as The Not Applicable Artists Project and started, in 2007, a series of regular evenings of music in London, called Appliances. Many of the performances recorded during the Appliances nights have been included in the mammoth-size release “An Introduction to Not Applicable” (2008), which is freely downloadable from the Not Applicable website.

For several years of the '00 decade Maurizio was involved in the F-IRE collective, playing with the sextet Meta Meta, the F-ire Large Ensemble and the bateria Rhythms of the City. He is a proud member of Dele Sosimi's Afrobeat Ensemble, and he plays percussion for several contemporary dance schools around London.

He is nowadays spending a good deal of his time in Berlin, where he's been consolidating his collaborations with the German faction of Not Applicable and organised, in Summer 2010, the Not Applicable Artists Festival 2010. The trio Fiium Shaarrk, with Isambard Khroustaliov and Rudi Fischerlehner, is his latest hot project, and the preparation of a forthcoming debut album is well under way.

The first and no doubt only album of the Oren Marshall / Maurizio Ravalico duo, In Thunder Rise, was released on the 15th of October 2010 with the Not Applicable label.

Since Winter 2011 Maurizio is the conga player of the European fringe of the Broadway musical Fela! 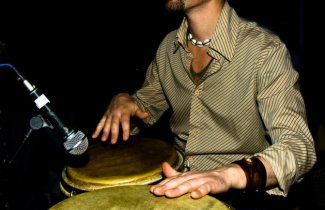