Worries In The Area 3: Rootsman vs Northern Lights 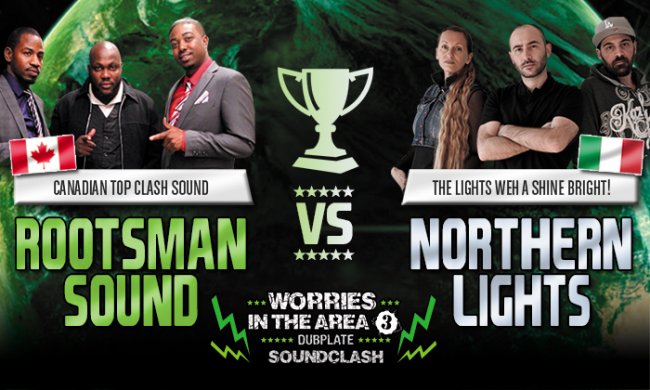 Worries In The Area 3

The Lights Weh A Shine Bright!:

From it's conception in the Garrison of Jane And Finch (Toronto's notorious badman territory) in 1997, Rootsman has evolved as Canada's #1 clash sound.
Clashing with many of the greatest sounds in the Industry such as Jaro, Bodyguard, Black Kat, Mighty Crown, King Addies, just to name a few. They've travelled from Guyana, Jamaica, Trinidad, Bermuda, St Vincent, The Bahamas , Europe and of course all over Canada and the USA.
What sets Rootsman apart from other sounds in the business is their unique collection dubs featuring many exclusive and customized riddims. Between clashing and numerous weekly events, they are in high demand in the juggling arena. Rootsman is currently the most talked about at any juggling event in Toronto.
Rootsman also keep busy with their highly anticipated cd collections "Roots And Culture , Keeping It Rootical" and many others which they feature quarterly.

Rootsman has been on many world stages in the Clash arena such as World Clash 2010 (JA) Riddim Clash (GER ) Global Clash (NY) 2010. Rootsman is currently the 2 time back to back champion at the Montreal Reggae Festival sound clash. Presently Rootsman is on a 4 clash winning streak with no intention of loosing.

Founded in 1999, after 16 years of activity Northern Lights sound system is still on top of his game, gaining fans, ratings and bookings all over Italy and Europe.
Based in the small city called Udine (up in the "Far East Italy" as they love to call it) Northern Lights started as a real sound system: in every NL dancehall they use to (and still do) ”string up" their own amplifiers and speaker boxes. Years after years they organized hundreds of Reggae Dancehall gigs and setted the trend for many other sounds to follow.
Back in 2004 NL did his debut in the sound clash arena against I Shence and after few italian clashes they joined the international arena by clashing sounds like: Heartical (France), Soundbwoy
Destiny (Germany), Magash (Switzerland), Warrior (Germany), Foundation (Holland).!
After a 3 years stop, in 2014 "the lights weh a shine bright" got successfully back in the soundclash arena with a "lock off" perfomance in the competition called "Royal City Clash" that took place in Turin on may 2014. First task for 2016 is defending the Royal title, this time against BID (Switzerland).
During summer 2015 another mission was accomplished: NL hosted an international reggae festival in their beloved region with 10 days of live shows with names of Bunny Wailer Ken Boothe Protoje Jah Cure, Shaggy’s caliber, while as the resident sound in the dancehall tent NL organized great dancehall gigs with names like Supersonic, Pow Pow and last but not least, promoted a sound clash between italian sounds.
“One Love World Reggae Festival 2016” has already confirmed NL as the host for main stage and the resident sound for the dancehall area. As the years go by this sound is getting stronger and stronger and ready to conquer every arena, dancehall and massive. 2016, “we just do things”, Northern Lights leads!!