Frootful is the name that illustrator and musician, Nick Radford, works under. Creativity is often referred to as being ‘fruitful’; his name reflects this while acknowledging the roots and influences that inspire his work – looking back to move forward.

Being something of a throwback chump, these roots tend to be placed sometime between the late 50s and early 60s – be they the limited colour palettes of traditional screenprinting and lithography techniques, jazz and soul album covers, or the music itself from this era.

Nick has been working professionally as an illustrator since graduating with a BA (Hons) Illustration in 2000. He started knocking about as a fledgling musician long before that, until a recent signing with Freestyle Records gave him the opportunity to step things up a gear. His music and illustration both inform each other, taking on the minimal approach that less is more and using similar influences to produce something classic yet contemporary.

Other skills include eating and surfing (with a little help from Empire Surfboards and howies) – but sadly not ball sports (call him ‘ball skills Radford’ if you dare). 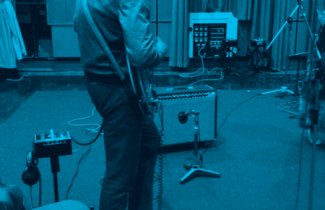